Private Practice or Working as Public Prosecutor: Which One is more Respectful? | Law Essays Help Blog
Skip to content 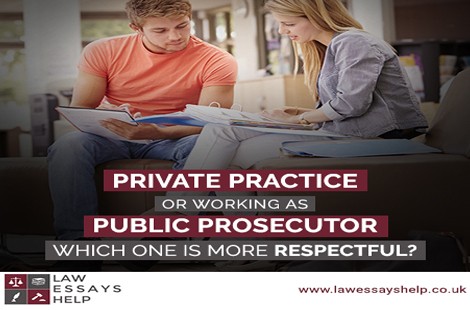 Private Practice or Working as Public Prosecutor: Which One is more Respectful?

Law graduates become lawyers once they obtain the required experience and that they acquire experience through practice. However, many are attracted by the perks of being a lawyer and that watching T.V serials of controversial lawyers has given them the impression that controversy generates significant amount of monetary rewards and even though it may, the thing is that all studies emphasize on ethics and that all law valedictorians should follow ethics regardless of circumstances. The main task of lawyer is to give justice to all, even if they have to cross their boundaries and that they must not break the law nor they should break the rules of investigation. They should not only play by the rule but should pursue the truth because nothing matters more than the truth and if they succeed in defending the truth then they are the true carriers of justice. Otherwise, they could be held in contempt of court and the law as well as awarded a prison sentence. Such issues should also be explained when solving law case studies.

In the United Kingdom, the general public has long been sceptical about the integrity of lawyers, while consumer and government concerns about their morality, access to justice, and the quality of legal services which have led to the increased regulation and calls for ethics to become central to legal education. However, Academics have ignored lawyers’ ethics in legal education because of the formalities in the legal field and that has resulted in the question of morality and justice being banished from teaching and study of law and due to the distinction and difference between academic and vocational issues in legal education as well. Admittedly, there has a relatively long-standing interest in related ‘macro’ ethical issues, such as access to justice, the meaning of professionalism, and the existence and justifiability of restrictive practices.  There are many rewards for a law graduate but none are greater than the pursuit of justice. It is an impeccable honour and pleasure to launch a gathering of leaders in the field around crucial issues for the profession and the public. Also, the evidence must not be circumstantial and that it must be based on concrete findings and sources, or else the lawyers might be in trouble. Law graduates must emphasise ethics upon themselves in order to ensure progress in their careers and as private practitioners of law, ethics holds paramount importance and that they should always deal cases with honesty. A law case study must also explain cases where public prosecutors won a case defended by private practitioners on ethical margins as well as the possible angles which all legal professionals should explore.

A public prosecutor is the lawyer of the people, working for both the state and the people and fights cases for those who are downtrodden and without resources to fight much more resourceful parties. They are public servants on payroll of the state and have the responsibilities of jury, lawyer and detective in order to determine the ethical and truthful outcome of the state. A private practitioner has more or less the same responsibilities but being in private practice, they have a tendency to favour clients who can provide them lucrative and luxurious rewards. In such cases, many private practitioners are often bound to lose respect in the society and such has to be considered by students in order to not just save face but to ensure that conscience survives in the end.

4 Types of Law That Law Students Can Specialise In